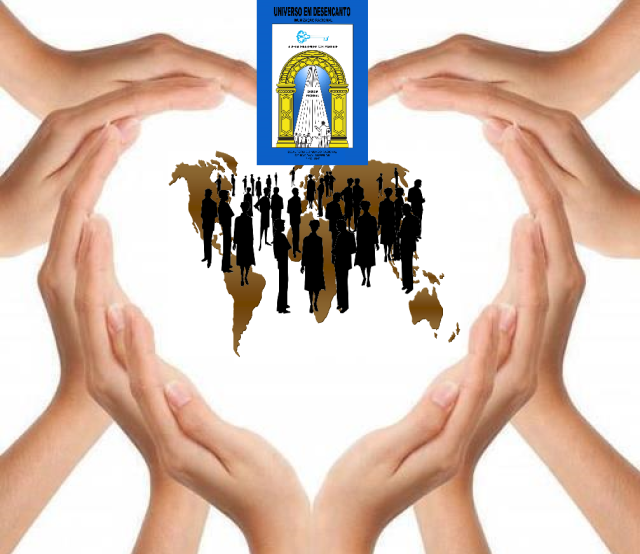 https://drive.google.com/open?id=0B_Q1dy73C4FdU3lReFB3eDI3QlZReDNoM2pzT3dKZ2V1a25z  (Click on the link to hear the audio)

My friends, in this world where we live it is all about appearances, symbolism and conventions.

So many times someone that has reached old age will look at the mirror and feel that his image does not correspond to what they really feel inside, because they still feel so young.

This is just an example to demonstrate what appearances are in fact: symbolism and convention.

The matter is just a vehicle of conducting people, who obviously have got nothing to do with it.

The matter is in a degenerative state for not being eternal, and the person, the living one who is being conducted by it, is an energy body, untouchable and eternal.

However, for lack of the true knowledge, it’s always been thought that the matter was the true representative of the person and, for this reason so much importance has been given to it, beyond the reality of his existence.

For worshipping the matter humanity has tried so hard to find in it what could never be found there: true happiness. The real person is not the matter, which is inferior to him. Therefore such terms as young and old, beautiful and ugly came up attesting for all the conventions and appearances.

Sex is another aspect that has been given far too much value, for it exists for the purpose of reproduction only, which is pertaining to the animal part. The true individual is RATIONAL and it has no gender.

It is easy now to understand why the world is of sufferings. Humanity has always sought for equilibrium in what is wrong – its animal side, which is in constant degeneration without any possibility of being happy because of its instability.

For a long time, that is eons and eons of years, it has been like that, which has put humanity at the crossroads of its own beliefs.

My friend, you can turn around this situation on your favor. The Truth can be found and it is all it takes to stop this never ending search for what seems so far away: TRUE HAPPINESS!

The Truth is on Earth and it does not offend, hurt or humiliate anybody. It ennobles the entire humanity, for it shows the SOLE way to bring everyone to the encounter of their TRUE INDIVIDUALITY – THE REASONING – the only true thing in this world and intangible to the visible and invisible material beings.

That is exactly what you read, visible and invisible material beings!

The TRUTH is on Earth since 1935, when Nature changed to a new phase, setting an end to the Second Millennium, which was the materialistic phase with all its functions; that is, thought and imagination running rampant to polish and perfect the thinkers for the posterior phase, which is the one ruling now. The Phase of Reasoning – THE RATIONAL PHASE.

Therefore thought and imagination are the failing functions which need to be replaced by the Reasoning, which is the function pertaining the THIRD MILLENNIUM. Nonetheless the Reasoning won’t be developed if the person is still living on appearances, symbolism and conventions, created in the Second Millennium since it all belongs to the past phase. The real way o life for humanity should be RATIONAL.

There you will find the reasons why the SUPERIOR WORLD from where we come, the ETERNAL RATIONAL WORLD, brought up the knowledge of RATIONAL CULTURE – the culture of the eternals – so that humanity once free from what has become outdated, thought and imagination, could finally access the means to develop its Reasoning through the reading of the books Universe in Disenchantment of Rational Culture.

Once you get hold of the Rational Knowledge which discloses the Universe where we live and the worlds beyond the matter, you will start developing your REASONING and, once and for all, be free of the burdens of the material symbolism and conventions. It is through the Development of the Reasoning that the person will acquire the right comprehension of his life and will never err anymore. This is the biggest praise of the Truth.

By getting everything right in life, one will feel free and happy for the rest of one’s life. Therefore, in order to achieve all that, there is no other way but to know thyself through the Development of the Reasoning which is found in the literary works of Rational Culture – whose book is UNIVERSE IN DISENCHANTMENT. A book dictated from the RATIONAL WORLD in Brazil!

This is the book that will be made known to all humanity, for it is what it most needs right now – the ULTIMATE KNOWLEDGE of our origin, the one of the Rational World. Only this knowledge can develop the pineal gland with its energy, the RATIONAL ENERGY.

The Reasoning is the most powerful part of the human being. It is the link to the RATIONAL ENERGY, which will defend all the readers of this book against the evil and violence which permeates all walks of life. And this marginality is beyond limits with drugs, victimizing the youth all around the Earth.

We urge you to wake up now and acknowledge the importance of thebook in your life. In the book you will find the protection of the RATIONAL ENERGY for your children and family.

The youngsters make the majority of people who still don’t know all that has been exposed here. They are on a boat on the revolted sea asking for help and seeing everything outdistancing without a glimpse of a coming solution.

To the entire youth, grab yourselves the RATIONAL ENERGY, which will provide a better life beyond all your expectations. All that and much more for those who take the RATIONAL KNOWLEDGE very seriously. With your Reasoning developed you will track the way to the RATIONAL WORLD.

My youngsters, get harmonized with what is the only right thing in this world of yours – THE RATIONAL ENERGY!

Get to know this great phase which is ruling in Nature. The Rational Phase should be taken by everyone regardless class, age and gender, for there is not a single soul that does not suffer in this world. The way to put off all this negativity is to connect yourself with the RATIONAL ENERGY. Stop your suffering right now! Read the book UNIVERSE IN DISENCHANTMENT OF RATIONAL CULTURE!

This is the book!