THE REASON WHY THE DARWINIAN THEORY OF EVOLUTION MAKES NO SENSE 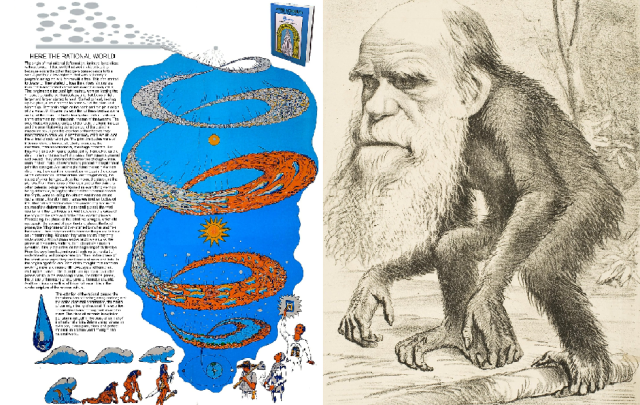 https://drive.google.com/open?id=0B_Q1dy73C4FdQ00xaldSV3pHTmM  (Click on the link to hear the audio)

The Darwinian theory of the species evolution states that life evolved from nothingness and reached the present state by mere chance.

Wrong! There is no casual evolution, for everything was precisely and Rationally made in favor of the functioning of the human species in this terrestrial plan, for, as beings of pure, clean and Rational energy – which we had been  in our pre-existential state – we could never live in the material world.

The terrestrial life is perishable for being nothing but a project of transference of a reality to another, which was precisely supervised by the Superior Consciousness of Nature which defined everything for our return to the state of clean, pure and perfect Rational energy.

The scientists and philosophers talk about the Before Existence, describing it as a chaotic universe of randomly possibilities ruled by casualness; a concept, by the way, too farfetched about the beginning of life.

Therefore how come could such world be chaotic?

Both scientists and philosophers have based their assumptions on thought and imagination in order to lay down the foundations of their studies, which are totally nonsense, because there were no thought and imagination before the completion of this electro-magnetic structure, composed by seven parts (all that and more in the books Universe in Disenchantment).

The terrifying condition of humanity is due to the fact that the humans are ruled by a system which conflicts with the objectives put up by Nature.

Everything will go back to the original state which is Rational and, while, we are not aware of that we will continue serving our inconsequent desires which are responsible for the existence of this world deviated from its true natural.

It has nothing to do with the past ruling the present or the future intervening with the course of history but the fundament, which pre-exists the human condition and wove the fabric of all transformative laws that define what we were, are and will be.

Perhaps there lays our main difficulty in accepting this fundament, which is far beyond the Artificial Culture.

Rational Culture comes even before all this construction; it is immanent and eternal and holds all the natural formation fundament, with its laws and prerogatives, something beyond the grasp of any being from this Cosmic Deformation, unless they study the books Universe in Disenchantment.

In the current times we have arrived at the so expected phase announced in the bible by the prophets, who lived once in this world: The RATIONAL REDEMPTOUS PHASE – THE RATIONAL PHASE.

Nonetheless it is mandatory that we disconnect ourselves from the electric and magnetic forces that produce thought and imagination, tying us more and more to the ground, and re-connect to the energy of our true natural state – the Rational Energy.

Thought and imagination accomplished their tasks in the maintenance of this temporary reality structure; however, as we have been witnessing all around, the world is crumbling into pieces, because the electric and magnetic energies won’t hold it together anymore; they have lost their regency which was bestowed to the transcendental powers of the 3rd Millennium for the development of the Reasoning (the pineal gland) in humanity. Thus the ousted electromagnetic power will dilapidate all that was build previously, including the humans, so that the world can be delivered fully cleaned up of any reminiscence of the 2nd Millennium.

The Rational Energy is the new regency of humanity, the one which will bring all the Rational animals back to their true world of origin – THE RATIONAL WORLD!

All that and much more in the books UNIVERSE IN DISENCHANTMENT!