TALKING ABOUT SCIENCES AND THOUGHT 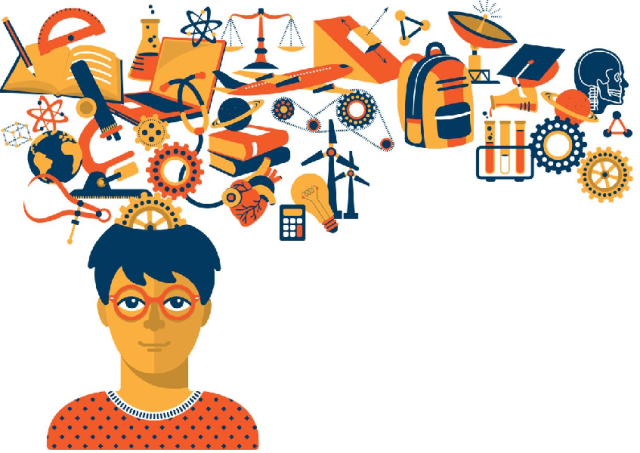 Everything that humanity has done through the ages has been imagining and thinking, but never knew why it thinks and imagines and the origin of thought / imagination, which is also unknown to the humans. Only now, in the Third Millennium, in the Books of Rational Culture, Universe in Disenchantment, we will have complete knowledge on this subject.

And what do the Books Universe in Disenchantment tell us about thought and imagination?

They prove to us that both are originated in this world we live in, from the matter, to keep us in the material world, very unlike humanity, which is a being of superior origin, a World Superior to this in which we are living.

This is why we have confused the thinking and imagination, which are inferior, with Reasoning, which is superior and of the same origin of the human being. Now, then, in this Third Millennium, we have reached the right stage for its development, due to our maturity.

The human beings always felt that they had something superior inside, something pure, and believed that thought and imagination were something pure. They were mistaken, for thought /imagination comes from matter, and matter is a being full of impurities and imperfections, and the Reasoning is a pure being, not being from the ground, not being of matter.

Then, prior to the Third Millennium, we were only thinking and imagining, thus being prepared for the arrival of the Reasoning Development Phase, which came into force in 1935.

And so, thought / imagination does not know the origin of the human being, for being an invisible force of matter, which creates false realities, for not knowing the true reality that is the First World, that gave birth to this second world where we are, with its visible and invisible beings.

Thought, ignorant of the origin of Nature that governs us, could only create fake truth, putting humanity against Nature, for its dilapidation. This dilapidation, constituted the preparation of humanity for the last phase of the life of matter that was to arrive, the Rational Phase, in which we are now, so that we can finally know and develop our Reasoning.

How can this preparation be explained through dilapidation? Dilapidation is suffering. And it is only through suffering that the human beings become interested in something new that will take them out of their suffering. Then they would have to be dilapidated to be interested in the New Phase and, consequently, knowing and adopting it.

Therefore, until the Phase of Reasoning development came to be, everything was created by thought / imagination through many experiences, which gave rise to Sciences in the scientific, religious and philosophical field, understanding here the term Sciences, as Knowing.

A knowledge all based on matter, which is nothing, both visible and invisible, because matter is a being in constant transformation, for being out of its True Natural, which is in the First World, the Origin of everything and everyone.

Conclusion: The humans, as a thinking beings, became robots controled by thought / imagination, to create everything that was necessary for their own dilapidation, for their own suffering, and always thinking that they were the makers of this progress. Actually they never knew their True Origin, otherwise they would never have allowed themselves to be driven by thought and imagination.

But it had to be in this way, until the right time came for the enlightenment of humanity, and that is now, in this jubilant Phase of the Third Millennium.

So, after these clarifications, it’s easy to understand why we’ve always been so wrong, never really getting anything right in this world, and when we did it right, it was all so temporary and fleeting.

That is the reason for the chaos in the world, for this chaos is the sum of all errors which have being handed down from generation to generation, because no one knows themselves, living without knowing who we are, where we come from and where we are going.

And people disconnected from Nature, out of her line, are enraged without obeying the universal natural laws, for not acknowledging them. And they become disrespectful, without feelings, putting their will above all else, including and especially above Nature, though, ignoring by filthy conveniences, that we depend on Nature in everything to live.

And because the overwhelming majority finds themselves in this situation, due to absurd vanities, they got attached to the forces of darkness, unconscious forces, having these forces as divine – proof of this are the various religious factions in wars that never cease, and each one of them fighting for its own “god”.

Thus has mankind arrived here unknown to itself, for turning its back on the True Nature, which is the TRUE GOD, a resident of the First World, the RATIONAL WORLD. The research that everyone should have invested in it is the inner research, to mold itself as a good son of Nature, respectful of its natural laws.

Respectful children, if they were so, they would not have needed to delve into the matter to find the solution to their problems.

The problems are there because people cannot fit in Nature. Only Nature holds the powers to bring all the solutions to her children without investing in sciences and research, for she can resolve everything very naturally. Nonetheless it is all so hard these days!

Because humanity is still living in the line of appearances away from Nature, embracing the artificial culture built up by thought. And by doing that, humanity is being charged by Nature through all types of problems such as, diseases, tragedies and so many bad things going on in the world

The problems got so unbearable that humanity tried to find a way out in sciences, however, the more they researched, the more trouble they got, because of their disrespect to Nature, as though they were saying: “Dear Nature you can’t present solutions to our problems so we will find them in matter.”

Now all coming to an end, the end of suffering and imbalance for those who delve into the studies of Rational Culture in the books Universe in Disenchantment, where they will develop their Reasoning, getting everything right and stop thinking once and for all, so that no mistakes will ever be committed.

Uma pessoa cuja preocupação única é trabalhar em prol da verdadeira consciência humana, inclusive a própria, através do desenvolvimento do raciocínio, com base nas leis naturais que regem a natureza e que se encontram no contencioso da cultura natural da natureza, a CULTURA RACIONAL, dos Livros Universo em Desencanto.
Ver todas as mensagens por nalub7 →
Esse post foi publicado em AUTOCONHECIMENTO, Livros, Não categorizado, Saúde e bem-estar e marcado Connected to thought humanity got more and more attached to matter, Consciousness is where our world of origin is, Humanity is this horrific situation for getting away from Nature, Matter both visible and invisible is fully unconscious, nalub7, Nature holds the solutions to all problems, Rational Culture, Rational Culture will save humanity because it develop the human reasoning in the pineal gland and humanity will be able to leave this world of matter once and for all, The Artificial Culture has doomed humanity, Universe in Disenchantment. Guardar link permanente.